We’ve all walked the Freedom Trail, sang “Sweet Caroline” at Fenway, and had a cannoli from Mike’s Pastry. Boston is famous for many things but once you’ve scratched those items off a bucket list, you may be wondering what’s next?  Here’s 9 different things to do in Boston for the people who think they’ve seen and done it all.

Hidden in plain sight at 6 Clearway Street is Boston’s secret sneaker shop. While Bodega might not have every shoe on the market, the unique environment alone makes it worth a visit.

Tucked in a North End alleyway is a massive Catholic shrine that’s been curated by Peter Baldassari for most of his life. Take a peek down 4–8 Battery Street located between Hanover and Commercial.

Madonna Queen of the Universe

Did you know there’s a 35-foot tall bronze statue in East Boston? Built in 1954 by the Don Orione Fathers, this shrine to the Blessed Mother is located close to Orient Heights and offers views of Boston Harbor and Logan Airport.

Next to the Intercontinental Hotel is a FREE observation deck at Independence Wharf. Check in at the front desk with your ID then take the elevator up to the 14th floor for sweeping views of the city and harbor. 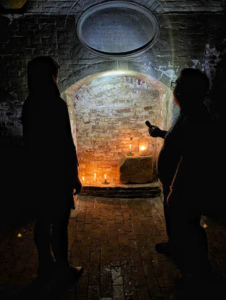 Beneath Boston’s oldest burial grounds lies a crypt known as the “Strangers’ Tomb”. Tomb 21 at King’s Chapel Burying Ground dates back to the 1750’s and holds the remains of people unable to afford a proper burial. It’s estimated to hold between 30 and 50 “strangers” to Boston.

Feeling inspired to play chess after binging The Queen’s Gambit? Head to Boston’s only board game bar and participate in an unrated blitz tournament. PSA: Guests can host D&D campaigns. 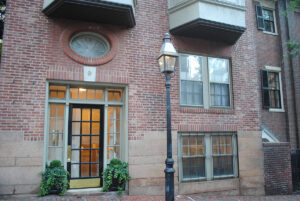 A number of famous authors once lived in Beacon Hill — in homes you can walk past today. While the residences look a bit different in modern times, there’s still plenty of inspiration to be had.

It’s no surprise our 35th President remains one of America’s favorite leaders. Exhibitions include photos, videos, and memorabilia from the life and travels of John F. Kennedy.

While it’s temporarily closed, the MOBA in Somerville is a one-of-a-kind museum specializing in all forms of bad art. It’s quirky, unconventional, and probably worse than whatever’s taped to your refrigerator. We hope they re-open soon.