Who doesn’t love a good dive bar? The floors might be sticky and the juke box is outdated but there’s something special about a drinking hole offering cheap beer and seats filled with regulars. Get off the beaten bar path and check out these Massachusetts dive bars — just remember to bring some cash.

The Tam in Boston

While it may look a bit obscure from the outside (and in the daytime), The Tam is a long-standing Irish dive bar in Boston’s Theater District. It’s even been mentioned on Buzzfeed as a “must visit” drinking establishment.

Sports fans can rejoice at East Boston’s Eddie C’s thanks to the cheap drinks and ample television screens.

If you’re looking for an inexpensive whiskey bar, head to Irish Village. PSA they’re offering to-go options including a toastie and a Guinness.

If the walls are covered in scribble, the drinks will trickle.

One of few Massachusetts dive bars focusing on level tables.

Quaint, cozy, and enthusiastically decorated — just don’t expect the bathrooms to be pristine.

Complete with a mug club (drink 170 beers in 180 days) and a kitchen open til midnight, we think the Bukowski Tavern would impress Charles.

Come for the live music, stay for the grungy vibes. 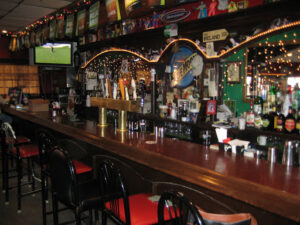 You might recognize Murphy’s Law from the movie Gone Baby Gone.

Originally opening in 1934, Paddy’s Lunch is the oldest family-owned pub in Cambridge. Interested in participating in their 5k charity run this September?

Situated in a neighborhood notorious for closing early, Corner Cafe is a great place to grab a night cap in the North End.

Dim lighting, lots of wood, and conveniently located in Downtown Crossing — what more could you ask for?

With $1 wieners on Wednesdays, karaoke on Thursdays, and DJ’s on Fridays and Saturdays what are you waiting for?

This dive bar recently replaced their dart boards and re-felted the pool table.

Seapoint Bar and Grill in Southie 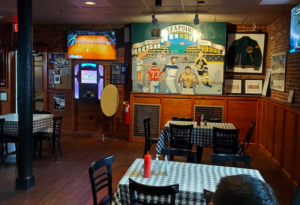 Open since 1979, this family-owned (and family-friendly) watering hole has a reputation for great steak tips.

Punk rock vibes, hot dogs (ask for the chili), and grubby bathrooms round out Model’s.