We’re back with a second round of Fenway Park history. If you haven’t read part one, you’re missing out. By 1935 Fenway Park and the Red Sox franchise were starting to improve thanks to Yawkey’s wallet. The Great Depression was over and the team was playing in a new and improved stadium.

Fenway Park hosts the New York Yankees for a double header on September 22, 1935 drawing in the largest crowd numbers recorded at 47,627 attendees.

In an effort to protect businesses on Lansdowne Street, netting was installed on top of the Green Monster

Bobby Doerr joins the team. Doerr would go on to compete with the Red Sox for 14 seasons despite one interruption due to military service.

On April 20, 1939 Ted Williams joins the Red Sox. Williams would remain on the roster for 19 years pausing his baseball career several times to serve his country.

‘Williamsburg‘ was created in 1940 when the right field bullpens were installed. While Ted Williams never asked for assistance hitting home runs, but the bullpens reduced the park size by 20 feet making it easier for the athlete to hit directly into the sweet spot.

Three-time U.S. President FDR gave his final campaign speech at Fenway Park with attendance numbers around 40,000. Roosevelt would be re-elected for a fourth and final time three days later. Eventually the 22nd Amendment was introduced in 1951 barring Presidents from serving more than two terms.

Jackie Robinson, Marvin Williams, and Sam Jethroe tried out for the Red Sox on April 16, 1945. The franchise never followed up—a decision they would later regret. 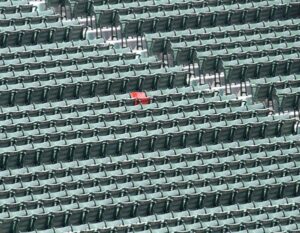 The same year blue upper-deck seats were installed. They would remain in place until 2010. Interested in buying a piece of Fenway Park history? 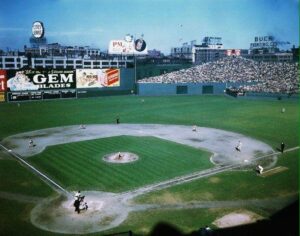 Until 1947 the Green Monster served as a place for advertisements. That is until a man named Emil Disario concocted the green color we know and love today. Want your man cave to have matching paint? Benjamin Moore sells the trademarked shade.

Vin Scully gives his first radio broadcast at Fenway Park when BU hosted Maryland. Scully would later build a reputation as the voice of the Dodgers.

On May 12, 1948 the first televised game at Fenway Park was broadcasted by WBZ-TV.